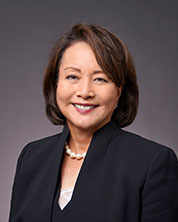 Phyllis is the Pacific Northwest Chairman for JPMorgan Chase and Co., serving as the firm’s senior executive in Washington, Oregon and Idaho. She became President/CEO of U.S. Bank of Washington in 1993 and was the first woman in the state to lead a bank. Her customer-focused growth initiatives and acquisitions doubled the bank’s total assets from $5.7 billion in 1993 to $9.5 billion in 1998, becoming the second-largest commercial bank in Washington.

Previously, Phyllis was President/CEO of The Seattle Foundation, Washington’s largest community foundation. While there, they doubled in charitable assets to $600 million.

She has extensive for-profit and not-for-profit Board experience. From 2003 to 2020 she was an Independent Director for Alaska Air Group. For seven years, she chaired the Audit Committee while serving on Nordstrom’s Board of Directors. She is currently on Toyota’s Diversity Advisory Board and chairs the U.S.-Japan Council. Phyllis is also a member of the Allen Institute and the Global Advisory Board of Women Corporate Directors.

Among the many awards she has received, in 2016, she was recognized as Seattle/King County’s "First Citizen." In 2015, she was awarded Seattle Business Magazine’s Lifetime Achievement Award and the 36th Regents' Distinguished Alumnus Award from Washington State University. She was also the receipient of the Pinnacle Award and the Outstanding 50 Asian Americans in Business Award. In 2014, Phyllis was recognized by the National Association of Corporate Directors as a "Top 100 Director" and she was the inaugural NACD Director of the Year Award recipient from the Pacific Northwest chapter.

Go-to Inspiration: "My go-to inspiration is my mother’s Hawaii roots. She always lived the "aloha spirit." This means to extend love, caring and hospitality to all you meet."

Robert developed his diverse operational, manufacturing, sales, product development, information technology and distribuition experience during his 34-year career at PACCAR, one of the largest manufacturers of commercial vehicles in the world.

Now retired, when Robert was Vice President and General Manager of PACCAR, he led the company’s worldwide parts distribution division to record profits. He successfully integrated the company’s European distribution business (after acquisition) and introduced leading edge technologies into the supply chain. When he was Vice President and General Manager of PACCAR’s Kenworth division, he led them to record market share and profitability. Robert was promoted to PACCAR’s Executive Vice President in 2010 to lead the corporation's successful business expansion into South America. He became Chief Financial Officer in 2013 and President of PACCAR in 2014.

He was a member of the company’s executive operating committee, Board Director for PACCAR Financial Corporation and a member of the PACCAR Audit Committee. He also co-led the development and presentation of the biannual five-year strategic plan for the PACCAR Board of Directors.

In keeping with a desire to help the community in which he lives, Robert serves on the Dean’s Advisory Board at the University of Washington Foster School of Business.

Go-to Inspiration: "I’ve always shared ‘Every day is a new day,’ which is both a message of optimism for a better future and a message of perseverance for challenging times." 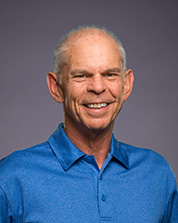 Marty Lott says his business model is based on Kindergarten simplicity - Tell the truth and be nice.

While SanMar has earned top-performing status in the imprinted and corporate apparel industry, Marty is best known for his calm leadership and humble demeanor. That intentional practice grew from experiencing poor customer service from a prominent t-shirt company back in the day. If bad service could still land sales, he wondered, then what could be achieved with dedicated, attentive customer service? His wife, Sharon, told him if he could do better, he should. So in 1971 he did just that. Forty-five years later, SanMar employs 4,000 people and distributes many hundreds of private, mill and retail label products from eight regional distribution centers.

Today Marty runs the company in partnership with his two sons, Jeremy and Jordan. He focuses much of his day-to-day time leading the company’s domestic distribution efforts across our eight warehouses. He makes it a habit to eat at the company-subsidized café to mingle with employees, and takes pride in never having executed a single lay-off since founding SanMar. Giving employees opportunities, he says is still the reason behind Marty's motivation to grow the company — one happy customer at a time.

Marty starts each day by practicing yoga and enjoys time with and his wife, Sharon, and their four grandchildren. He was selected by ASI (Advertising Specialty Institute) as Person of the Year in 2011.

Go-to Inspiration: "Try to do it better today than you did yesterday."

Jordan is co-owner of SanMar along with his father, Marty, and brother, Jeremy. A seasoned real estate development executive, Jordan’s experience centers around property acquisition and development, asset management and other corporate administrative functions.

While serving on SanMar’s Board of Advisors, he hopes to help SanMar continue to earn national recognition as a premier imprinted apparel supplier and distributor in the United States by prioritizing first-class customer service.

Currently, he is an active member of the Commercial Real Estate Development Association and serves as a Research Foundation Governor for the National Association for Industrial and Office Parks.

His free time is spent with his wife and two young daughters. He also enjoys skiing, swimming and running, especially in the beautiful Pacific Northwest which he calls home.

Favorite SanMar Family Value:"Be nice. It's simple, but it's important."

Go-to Inspiration: "Both my grandfather and my dad have always set the example to be thoughtful, deliberate and to show diligent restraint." 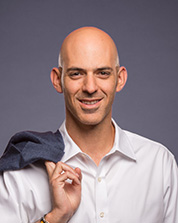 A picture on SanMar's very first catalog cover with a two-year-old peddling a big wheel proves it — Jeremy has worked at SanMar for nearly his entire life.

Today, as President of the family-owned business, Jeremy works in partnership with his father, Marty and his brother, Jordan. Over the years Jeremy learned the business from the inside out, from pulling orders to purchasing. After college and a stint studying in Hong Kong, he launched his career as an analyst for investment bank Piper Jaffray's technology team. Jeremy moved to Chicago in 2001 to earn his MBA, and then joined SanMar full-time. Adding strategy to vision, he continues to steward the company toward long-term growth and health. Proud of the opportunities given to so many tenured staff members to thrive, he often spends time "table-hopping" at the company's on-site café. He learns a lot during those casual conversations because, he says, employees have the pulse on what's really going on in their arenas.

Go-to Inspiration: "Peter Drucker said, 'Culture eats strategy for breakfast. 'We spend a lot of time building a workplace where people are happy to come every day, because they take great care of our customers."